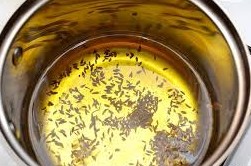 ?Drinking 8 glasses of water is beneficial for your health?, well that has become a known truth today, and however enriching these 8 glasses would give you better benefits.

60% of your body is made of fluids including water which help in several body functions such as digesting your food, transporting nutrients and most importantly maintaining your body temperature.

Water contains various minerals naturally however you could still enrich it by adding afew ingredients. This enriched water not only gives you the advantages of rinking water but also helps you take in extra nutrients that your body requires and supplies it in the most absorbable form. Some examples of enrichment are using jeera, saunf, green tea, coriander leaves, fenugreek seeds and so on

There are so many enrichments that can be done to water and hence a series, again the benefits are too vast to be covered in a single post.

How to Prepare Jeera Water

Well, there is no secret methods of preparation, just boil a handful of jeera for 10 mins and strain it into your thermos. If you prefer drinking it cool you could do so too.

Drinking 2 glasses of warm water as soon as you get up in the morning is one of the best practices any health tip would suggest you.

Better Digestion and Removal of Toxins

Cumin seed is a well known natural remedy for enhancing digestion and strengthening liver and intestine. Drinking jeera water regularly can make your digestive and excretory system work well so that you would not have to worry about common ailments such as diarrhea, flatulence or gastric problems.

On regular consumption toxins from your body are removed and your metabolism increases. You also tend secrete more bile juices thereby getting rid of abdominal gas or bloating.

Jeera is a rich source of iron and vitamins. It is been studied that one easpoon of jeera in one galss of water contains 1.3 mg of iron, it also contains fair amounts of vitamin A, vitamin C and antioxidants. Iron is the building block of hemoglobin and if you are deficient in iron, looks no other place than Jeera water.

Insomnia or sleeplessness has become common to all age groups off late. A glass of Jeera water taken twice a day has the ability to decongest your respiratory tract and thus helps in normal breathing during sleep. It also makes your system clean so that sound sleep is not disturbed.

Well Jeera water has a number of benefits that can be had without putting too much effort, including it in your lifestyle can be an easy way towards healthy living.