Out-Jump Your Nutritional Intake – Microgreens – Do You Know Them 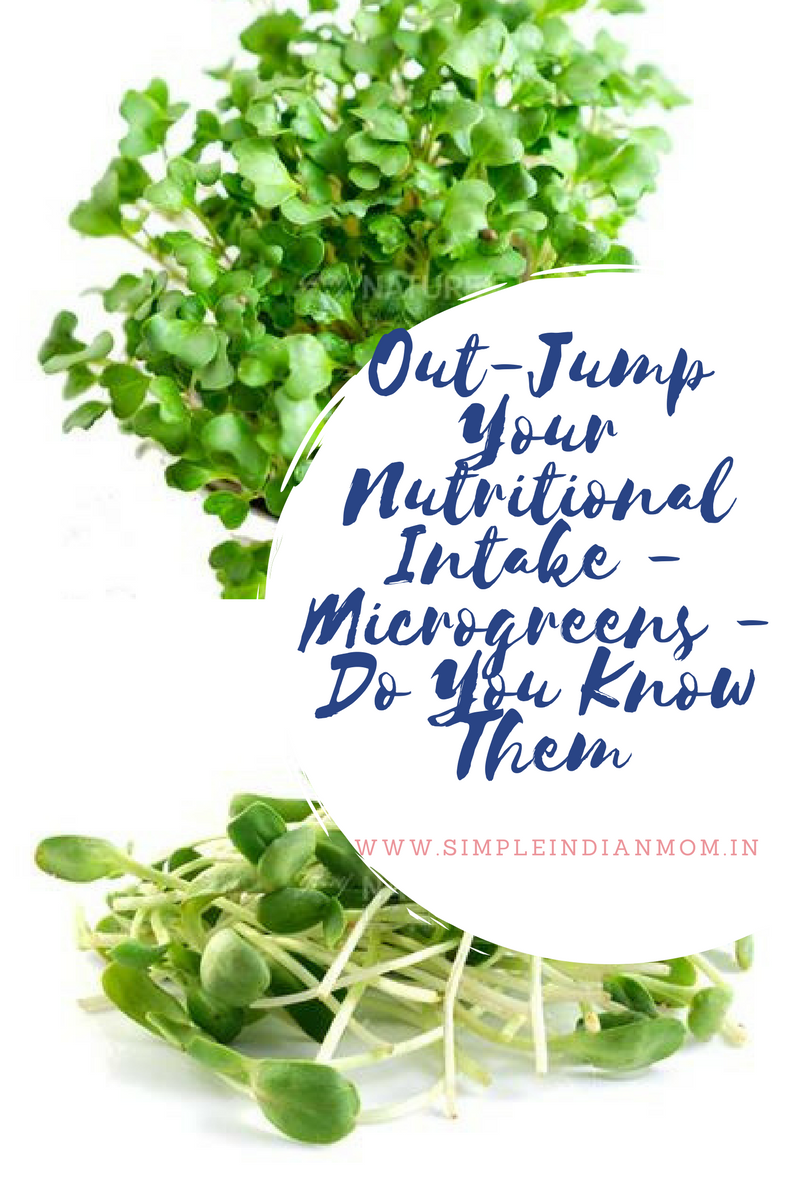 Have you heard of microgreens?

No, I am not talking about the green leafy vegetables.

Microgreens –  They have nothing to do with microbes, however you would be left amazed at the nutrient value they offer to your general health.

I can never overstress the knowledge of our tradition makers, in Tamilnadu and in Chhattisgarh too there is this custom of growing seedlings during temple festivities.

These 14 days old seedlings are the hot and happening microgreens that we are going to have a look at today.

As a change in food, we have slowly come to accept the tiny-fication of many vegetables we consume – baby lettuce, baby squash, oh yes!baby corn and so on. Not alone are these baby sizes preferred for their cute look but also their size makes them more easily consumable and tasty too.

Now, is the time of these juvenile plants.

Hmm, so you are thinking I am speaking of sprouts (may be in a different language) well, no, I really am speaking of 7 to 15 days old plants. They are so small and young that they are called Microgreens.

What Is So Special

For one, these tiny plants contain all the frangrance, flavors and also the taste of the plant they are going to become.

Secondly – in about just 14 days they are so hugely filled with nutrients you would do anything to get.

A research conducted by USDA by Gene Lester, and his colleagues at University of Maryland, College Park, have confirmed that the microgreens actually are packed with nutrients.

The researchers looked at four groups of vitamins and other phytochemicals – including vitamin C, vitamin E, and beta carotene — in 25 varieties of microgreens. They found that leaves from almost all of the microgreens had four to six times more nutrients than the mature leaves of the same plant.

and Thirdy – you could use them to garnish anything from Indian soups to Chinese food to Italian pizzas. They go with everything, just as the vegetable does.

Microgreens are found to be the actual nutrient hub of vegetables. The studies are in their begining phases and yet they have been so positive.

In the paper published in ARS Magazine Gene Lester claims that the total vitamin C content ranged from 20 to 147 milligrams (mg) per 100 grams of cotyledon fresh weight, depending on which plant species was being tested. The amounts of the carotenoids beta-carotene, lutein/zeaxanthin, and violaxanthin ranged from about 0.6 mg to 12.1 mg per 100 grams of fresh weight.

Highest in vitamin K1 compared to other juvenile plants

Highest in vitamin E compared to other microgreens

Packed with protein, it has 24 to 30 percent more protein than its grown counterpart.

How To Go About It

Now that you have understood the nutritional value, begin growing your own microgreens.

How To Grow Microgreens

I know many of you have been repeatedly worried about not having space for growing even vertically, this is your chance to eat nutritionally.

Well, if you still find it difficult, you can buy microgreens from SIM Organics, we are just a mail away.

However, seeing the ease of growing microgreens I would strongly recommend you to grow them.