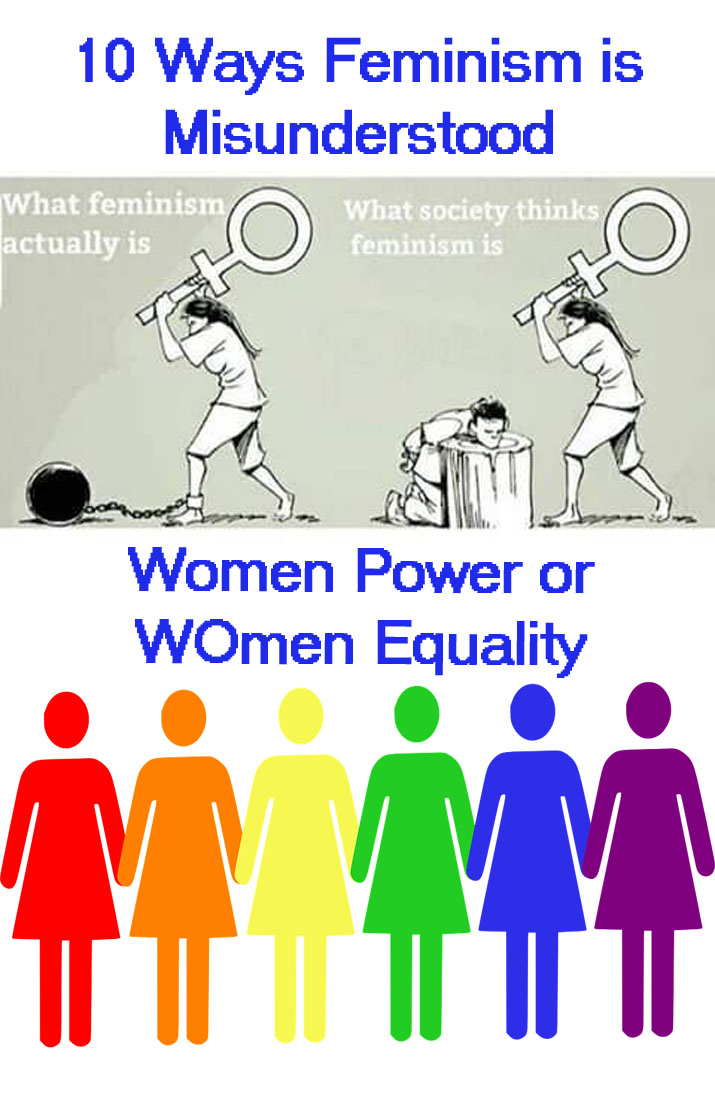 When we speak of Feminism we seem to always get into a debate which extents to usually someone asking to Define what feminism really is?

Feminism is more of a perception than a definition and each person seems to perceive it in a different way.

However, most times, feminism is misunderstood in many ways and it is not uncommon to see people with a diagonally opposite opinion about feminism calling themselves a feminist.

10 Ways in Which Feminism is Misunderstood

Social scientist think women behaving like men is more a semantic trick than a true scientific explanation. In fact these women seem to have a higher regard to men and hence feel inferior from inside as a woman- and hence the man like behavior.

Elizabeth Cashdan  from Department of Anthropology, University of Utah, however reports that such behaviors can also be due to hormonal changes.

2. The Misandrist behavior – Hatred Toward Men

Some women go a step ahead and try to overpower men. They want to earn more than men, they want to become more powerful in office than their counterparts.

There are cases where women try not to have any association with men and try to avoid them totally.

Who is a feminist? Is there a woman who does not support her own self? However there still seem some women who feel calling themselves a feminist is to say she is arrogant.

4. Feminists Should Always Raise Their Voices

This is something like a unsaid rule to some who call themselves feminists. They always need to raise their voice where ever they are, that seems to them that they are some superpower.

They keep repeating “I am feminist in every forum”

Oops! I am really sorry, but every women is powerful in a lot of ways and the ones who know that, keep quite, enjoy the power. Shouting does not actually bring the power to you!

5. You Need to Join Women Clubs

This is another seemingly affluent group of feminists, who want to speak about feminism in high teas and over cups of coffees.

They actually do not know the ground reality of women in the society. They enjoy great sophistication, and feel women are tortured with too much burden of not having freedom of spending much.

In fact these are women who think all men are offenders.

I know you are as surprised as me, yes! there are some women who are against feminism!

These women feel that feminism means to hate men, so they do not want to hate men and hence are against feminism.

8. Only Women Can Be Feminists

There are many men who look at women equal to men and give equal respect. However there are women who think men can never be feminists.

There are women who think that if they show that their support to feminism they would be misunderstood to be misandrists and accept to be bullied and mistreated.

Such doormat behavior in fact makes them an easy prey to be ruled by men.

Finally the shamers – these are feminists who make every other woman in her vicinity like a fly on the wall. belittling other women seems to be her hobby and makes it a rule to join men and make fun of other women.

These women think to shame other women who do not think as her is feminism.

So what do you think feminism really is? Have you understood feminism.