HomeBeautyNose Pins ? A Tradition that Enhances the Beauty of Indian Women
Beauty

Nose Pins ? A Tradition that Enhances the Beauty of Indian Women 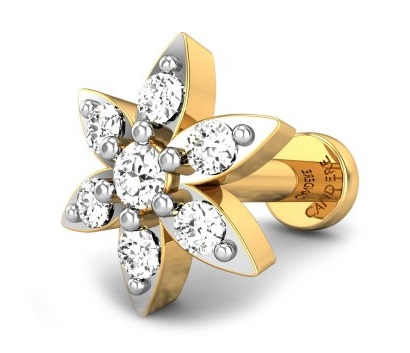 Among the jewels worn by women the one that has been scientifically researched, traditionally considered sacred and aesthetically attractive is the nose pin. Nose pin is worn in India from very long time, although it is been said that nose pins originated in Middle East and came to India in the 16 th century with the Mughals, strong arguments to say so have not been put forth.

Unlike the Mangalsutras that is mandatory for married women, nose pins generally are not bound by marriage or age, any woman can wear nose pins and in fact younger women are fond of wearing them than the aged women. There is no strict of wearing them too, one can wear in a single nostril as a stud called the phul or as a ring called the Nath. Both nostrils can be pierced and nose pins can be worn on both of them.

It is a common belief that nose pins are worn for beauty, well it is not so, there are a number of health benefits that acts both on your body and mind when you wear a nose pin.

Studies have revealed that nose, one of the six sense organs is not only a sense organ helping you in breathing and smelling different odours, it is also an organ that controls various emotions and feelings such as passion, romance and sexual feelings. Woman with nose pins are emotionally strong. It has been proven that women with nose pins are hard to hypnotize or mesmerize.

The point of piercing in the nostril strengthens ovaries thereby bringing about positive changes in the sexuality of a woman and favorable conditions for child birth in her body. This is the reason why most customs insist on piercing nostrils and wearing nose pins when a girl is ready for marriage.

The point where the nose is pierced is the acupressure point which is related to the delivery, and when nose is pierced at this point women would feel less pain during delivery with fewer complications.

In rural India one would not miss women transplanting rice seedlings in the fields, although it was long considered that such jobs being easier and not needing much manpower were given to the women, recent researches prove something far from it.

The Vegas nerve, one of the 12 cranial nerves, that extends from the brain stem to the abdomen passes through many organs including heart, esophagus, and lungs principally functions as an exporter (expeller) of carbon di oxide and other unwanted gases from the body. This carbon-di-oxide has a temperature higher than that of the atmosphere outside. This process of expelling CO2 is very important to maintain the body temperature.

When women wear a nose ring the process of expelling these unwanted gases is faster and the body is cooled sooner. Thus nose pins, the pierced nostril is very important for a woman to keep them cool, this coolness is what makes them the first choice for transplanting seedlings, because warm hands would cause damage to the young seedlings.

Heat regulation in the body is directly related to blood pressure and emotional strength, a hot body gets angry faster than a cooler one. Thus to maintain peace and tranquility in a home, women were asked to wear these nose pins, mostly on both nostrils.

Gold is considered to be the best metal for nose pins, mainly because of its property of absorbing heat. The heat coming out of the nostril is absorb and cooled out of the body. Although other metals can be used for their exquisiteness or beauty, wearing a gold nose pin is the most advised.

If you have a broad nose, go for nose pins with more than two stones embedded in it. This will make your nose look smaller and the proportion of your face would become perfect.

For people with nose that is no so perfect wearing a nose pin would attract attention away from the nose making you feel less conscious.

For those who have a sharp nose a single diamond nose pin on the right nostril will enhance the look of the nose. Simple designs look best for these people.